An LED head torch is a perfect tool to have close by when sorting out night emergencies, going for a run or working under your car hood.

It leaves your hands free to tackle anything or hold on to extra stuff without worrying about your safety being compromised.

This chart below can be used to compare the best head torches in 2020.

You can click any of the columns at the top to sort. For example, if you click “lumens” the head torches will be arranged in order from highest to lowest lumens.

Head torches come in a variety of shapes, sizes and at different price ranges. On any given day, there is a wide mix of rechargeable head torches, to cree and water resistant types available. Which torch you consider to be the ideal head torch for you will often depend on what you plan on doing  and conditions to be encountered. This guide will examine the various head torches to help you decide on the right one for you.

Rechargeable Head Torches
An ever increasing number of head torches, such as the Active USB head torch, utilise their own in-built battery units which can just b recharged using a USB cable. A USB rechargeable head torch can come in handy if you have access to a power source or portable power bank.

Battery Powered Head Torches
Many head torches will use alkaline, lithium and nickel metal hydride (NiMH) batteries in the usual AA or AAA sizes or CR2032 batteries (thin disc shaped batteries). Once the batteries are low on power in an LED torch, you will lose all light as LEDs don’t dim out like a traditional bulb.

How hot or cold it is can also have an effect on the batteries, with battery performance dropping by approximately 20% at 0 Degrees Celsius for alkaline batteries, lithium batteries will fair better.

Keeping batteries warm can minimise the problems so it is worth looking for a head torch with a separate battery unit if you’re going to be using it in cold conditions regularly.

Wind up Head Torches
Wind up head torches are powered by winding a handle which stores a small amount of power inside a limited short discharge battery. They will have a short run time (20-30 minutes) and lower power than battery equivalents but their lack of batteries makes them an ideal back up torch.

The brightness of each head torch will be expressed in Lumens and in very broad terms the higher the number of Lumens, the greater the light output. In some scenarios, a head torch with a lower Lumens output and a more focused beam could be better, for example whilst fishing or map reading.

CREE head torches, such as the Extreme Cree USB 3 Watt Head Torch, are some of the brightest and most versatile head torches available. Cree head torches use LEDs as their light source. High powered Cree LED’s are up to six times brighter than traditional LED’s.

To get a sufficient level of light more modern head torches will use a Krypton or halogen bulb. Although these give good light penetration (the distance the light can be useful for), they also produce a lot of heat. A single bulb head torch is also less robust than an LED so carrying spare batteries and a spare bulb is sensible for longer periods of use.

Best For: General use around the house, during power outages etc.

Not suited for: Activities that require long periods of use due to short battery life. If you’re likely to be in remote places for extended periods of time, they might not be suitable due to the fragility of the bulbs and their associated lifespan. 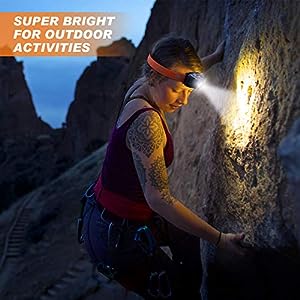 Many single LED head torches have a magnifying lens placed in front of the LED increasing the light output. This means even the smallest head torch can provide hours of good quality light very efficiently.

A multi LED array will provide more light than a single LED head torch but won’t necessarily have a greater beam distance.

The quantity of LEDs in use can generally be altered to suit the intensity of the light you need. For example a 10 LED head torch could be used in 3, 6 or 10 LED mode depending on light levels needed and power saving requirements.

Best For: Especially useful for camping. Multi-arrays with red or green LEDs are of particular use to military personnel, hunters and scouts.

Not suited for: Some situations depending on locality. Many places, including the Lake District and Peak District, will send out rescue teams if they detect a red flashing light during night hours as it is a distress signal. 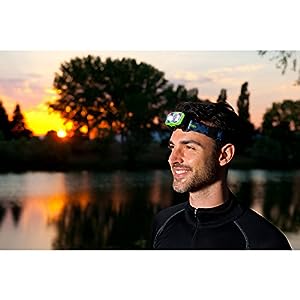 A combined light array head torch will use both a krypton or halogen bulb and a number of LEDs to satisfy different conditions. The standard bulb

Run Time
High powered LEDs and Hybrid units run at full power and can drain batteries very quickly, whereas single low powered LEDs will run for weeks at a time.

Weight & Size
This can vary greatly but the most important thing is to choose a head torch which will feel comfortable on your head for hours at a time.

Fit & Comfort
It’s important to choose a head torch which feels comfortable on your head. Bigger head torches will have a strap over the top of your head to stop them sliding down whilst in use, lighter units only need a strap around your head.

Beam Focussing & Angle Adjustment
Generally, smaller units have fewer features available when it comes to adjustment compared with larger units. It’s important to work out the amount of adjustment you will need to choose the correct torch for you.

Ease of Use
Do you find the torch simple and easy to operate and will you be able to use it in difficult conditions?

We aim to continue adding to the list, showing the pros and cons of each available head torch on the market today.

If you would like us to review and feature a specific head torch, please contact us today.